The Quick and the Dead:

*** This tour was published in March 2021, when the Covid-19 pandemic was active.  Please wear a mask/face covering and maintain a social distance of 6 ft from people not in your household.  Visit www.emergencyslo.org for the latest in public health advice. ***

“He ascended into heaven, and sitteth on the right hand of God the Father Almighty;
From thence he shall come to judge the quick and the dead.”
Apostle’s Creed, Book of Common Prayer, 1662
Following in the Footsteps of the Vigilantes – and Their Victims
Mission Plaza has been described as “the jewel of downtown San Luis Obispo.” Most residents and visitors link this site to the origin story of our community: Spanish padres first held a Mass nearby in 1772 and began construction of the mission complex at this site in 1794, the fifth in the chain of 21 California Missions.

Mission Plaza may hold a treasured place in our heart, but its ambience obscures a darker history: In May and June of 1858, a self-appointed Committee of Vigilance used the Mission as a jail and impromptu courthouse, and systematically hunted down and hanged seven “Californios” (people native to California prior to the 1850 Statehood). Because they had been Mexican citizens prior to the War with Mexico, these men were deemed US citizens when the war ended in 1848. They were still American citizens ten years later when their necks were stretched.

The “official story” is that the Vigilantes had rid the County of murderous bandits, the so-called “Powers-Linares Gang.” The truth is more complicated.

This Self-Guided Tour tells the story of one woman and four men at the center of the 1858 Vigilance activity in Mission Plaza: Ramona Carrillo de Pacheco y Wilson, her son Romualdo Pacheco, Jr. and Walter Murray (the Vigilantes), and Jack Powers and Pio Linares (their victims).

The violence that permeates the story of the Committee of Vigilance casts a shadow over Mission Plaza. There’s a lighter story of Ramona Carrillo y Pacheco de Wilson however: Her faith and devotion to her son, to her extended family, and to her community clearly helped to pacify San Luis Obispo and to all of California during the earliest hours of its transition to American rule, even after 175 years.

Step into the story and begin the tour at “Site #1,” now the home of our SLO County History Center, formerly the Carnegie Free Library (1905) at the south end of Mission Plaza. In 1858, this site was the “town home” of Ramona Carrillo de Pacheco y Wilson and her husband Captain John Wilson. 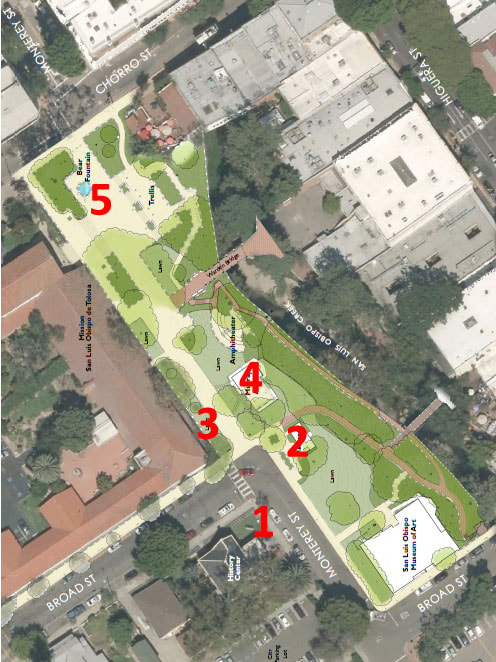