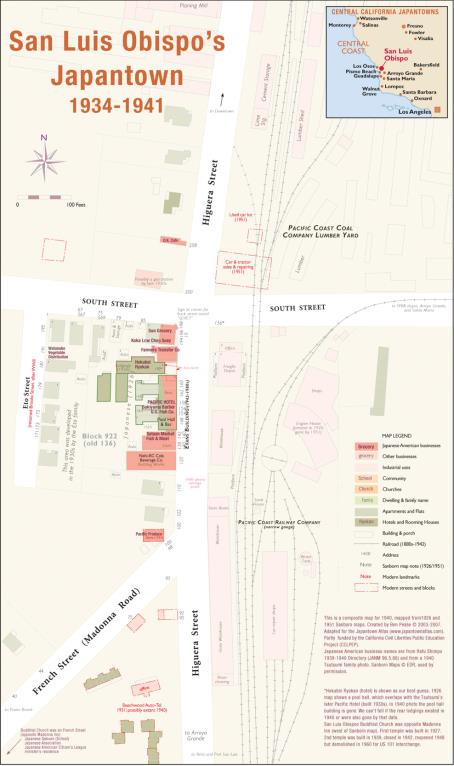 The History Center of San Luis Obispo County will focus once again on the history of ethnic and racial tensions within our community with our next Carnegie Lecture on Friday, December 4 at 5:30. Two well-known local speakers will combine to tell the story of one of the most unique and distinctive neighborhoods in San Luis Obispo: Eto Park and Brook Street.

Originally known as “Portuguese Flats,” the “Nippon Tract” was developed by the Eto family and thrived in the 1930s as a “Nihonmachi” (Japantown) – until the forced removal of its Japanese-American residents and businesses in 1942 as a result of anti-Japanese hysteria at the onset of the war. After the war, the homes were occupied by a largely African-American population, some of whom were returning GIs stationed at Camp Roberts. Many of these residents founded and became worshippers in Springfield Baptist Church, later St. Luke Missionary Baptist Church.

This small neighborhood is reached near the west end of South Street, with the church at the south end of the street adjacent to Eto Park – one of the most tranquil and picturesque parks in the entire city and a living memorial to those Japanese-Americans who had found sanctuary there prior to the onset of World War II.

A self-guided walking tour of this neighborhood will be available online at the History Center on the day of the lecture. Printed copies will be distributed with a delicious tri-tip barbecue on Sunday afternoon from 1-5 pm at Villa Automotive at the end of South Street adjacent to Brook Street. The BBQ, provided by Sid’s Redneck Barbecue, will include a 3-lb tri-tip, beans, salad and bread to feed a family of four. Tickets for can be obtained for the BBQ at the History Center web site.

This lecture will be taking place via Zoom, a very user-friendly app that requires only one click on a link that we will send by email to you. You will need a computer, tablet, or phone capable of connecting to Zoom to view the video feed, OR to just listen by audio. To register for the lecture, enter your email in the form below. The Zoom link will be sent out at 5:00 pm that day (Friday).