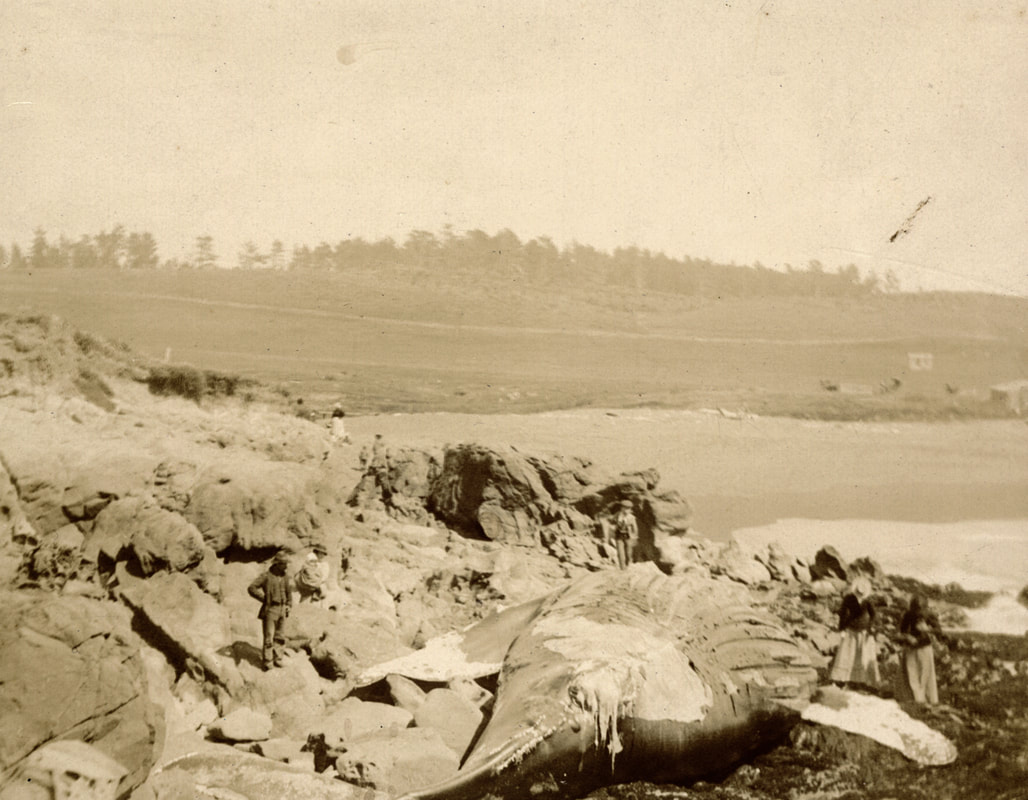 Several people scattered on the rocks look at a beached whale on its back. Photo taken at San Simeon beach - Undated
Originally published January 21, 1887 in the weekly San Luis Obispo Tribune

One of the most interesting localities in the vicinity of Port Harford is Whaler’s Point, situated about three-fourths of a mile from and very nearly south of the wharf.  For a number of years past it has been a whaling station and from its location and the barren, rocky formation of the land in the immediate vicinity, it is not probable that it will be put to any other use.  To reach the point by land is an arduous and difficult undertaking, and once performed will effectually cure the tourist of venturing upon a similar exploit.  The only comfortable and rational route is by water from the wharf, which can be accomplished at a trifling cost.  It is rarely that the whalers have visitors, but when favored in this respect they are courteous to a degree and extremely liberal in dispensing small presents in the way of whalebone, sharks teeth, and other articles of a like nature that figure in the make-up of the denizens of the deep.

The view from the Point, if one finds satisfaction in gazing upon water, can not be rivaled.  To the left lies the spacious and splendid harbor of San Luis Obispo, walled in on three sides by lofty and rugged mountains that stand as a barrier between the placid waters and the strong northers that occasionally spring up inland.  Facing the point reposes the mighty Pacific, which stretches away in the distance until the restless waters seem to blend with the azure sky. 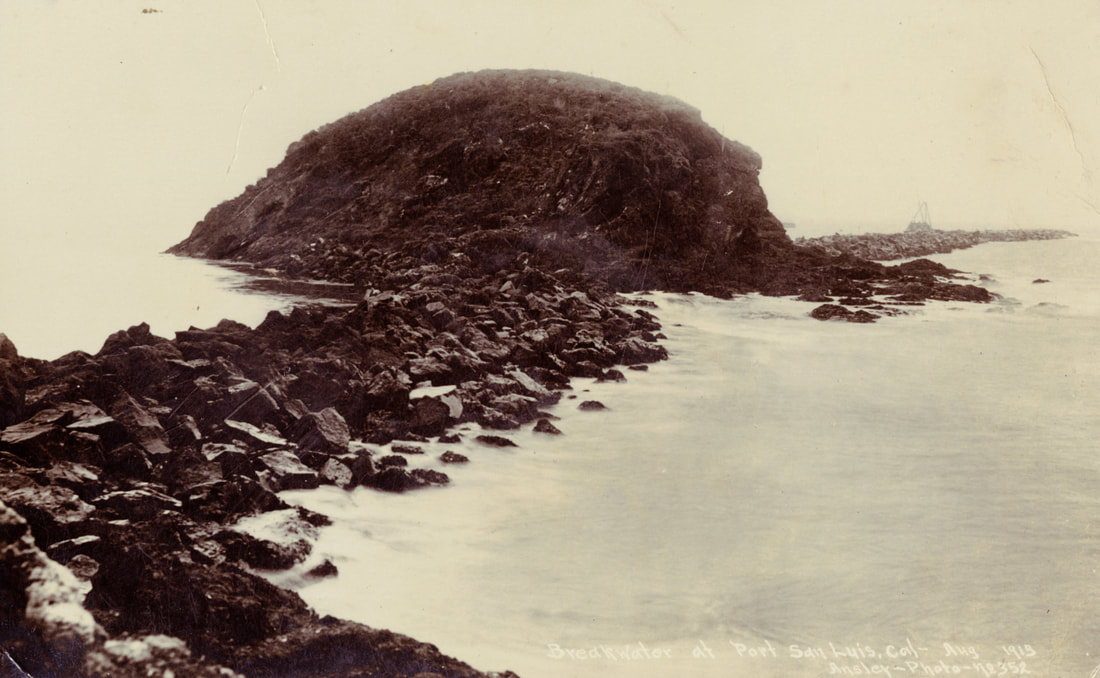 Breakwater and Whaler's Island at Port San Luis - Aug. 1913
The aromatic atmosphere, however, which hovers over the point, interferes considerably with a proper appreciation of the grand panorama which nature’s showman has unfolded.  In fact, the air about the point is the “rankest compound of villainous smells that ever offended human nostrils.”  The odors have doubtless been accumulating for years and age has only added to their pungency.  They have now become so pungent that a person whose olfactories are delicately strung would not long linger in the odorous locality.  After a short time, however, the disagreeable smell becomes less noticeable and the curiosity of the visitor, in examining the paraphernalia of the whalers, soon leads him to forget the matter.

The calling of a whaleman is replete with danger, while the profits accruing from it are far from being commensurate with the perils run.  An old veteran at the point, whom the writer interviewed, stated that he had been lifted skywards a number of times by wounded whales and once narrowly escaped being swallowed by one while on a cruise in the arctic regions, but the fascination attendant upon the life held him to the harpoon. 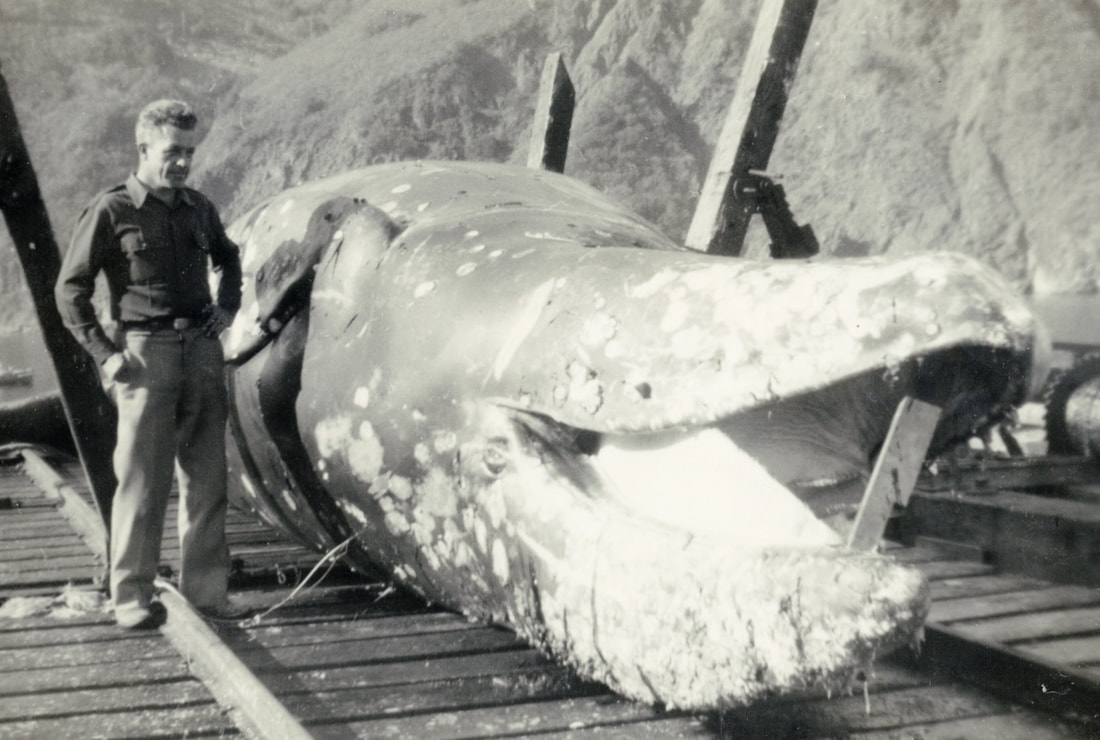 The present force at the point consists of twenty men under command of Captain John Oliver, who has followed the calling the greater portion of his life.  There are also two ladies at the station, one the wife of captain Oliver and the other the wife of the lighthouse keeper.  The whaling season lasts about four months, commencing with November and ending about the last of February.  During the summer months the whales go down the coast, but not in sufficient numbers to pay to hunt them.  Last season was a very unprofitable one to Captain Oliver and his men, they only capturing three whales.  This small catch was not sufficient to pay expenses.  So far, the current season has been quite satisfactory.  Five have been taken, the largest netting seventy barrels of oil.  The others yielded, on an average, fifty barrels each.  The profits this year are greatly diminished on account of the low price of oil, which at present is worth only 22 ½ cents a gallon, or $6.75 a barrel.

The species of whale caught at this station are of the bowhead of variety and have no commercial value aside from their oil and sinews.  The latter is used principally in the manufacture of strings for musical instruments, and sells in the market at seventy and eight cents per pound.  The bones of the bowhead are valueless and no pretense is made at saving them.  When a sperm whale or right whale is captured the whaleman generally celebrate the event and grog is portioned out quite liberally.  The bones of these whales are quite valuable and they sometimes yield as high as twenty tons of pure oil.  It is very rarely that either the sperm or right whale is seen in the vicinity of Port Harford.  One was taken at San Simeon last year, while at Monterey they are frequently espied.  They net the fishermen from $1200 to $2000.

The bowheads are very numerous, especially on the San Luis Obispo coast.  Seldom a day passes but what several are seen.  When one is discovered by the lookout, two boats each manned by six men immediately give chase, and when a boat approaches close enough a harpoon is fired into the monster, and then an exciting time ensues.  The harpoon is fired from a gun especially made for the purpose.  It is sometimes three feet in length and weighs about thirty pounds.  It is loaded with nearly a pound of powder, and when discharged, the rebound is so vigorous that the aimsman generally performs an involuntary somersault backwards.  The gun is limited in range to about 150 feet.  A rope, several hundred feet in length, is fastened to the harpoon and serves as a tow-line to the boat when the whale is struck.  The whale, when harpooned, frequently strikes direct out to sea, and sometimes takes his pursuers ten or fifteen miles from the shore before tiring out.  When exhausted, the gigantic mammal rises to the surface to recover breath.

The whale men then cautiously approach and when sufficiently near, an iron bomb, about two and a half feet in length and charged with from fifteen to twenty pounds of powder, is fired into the whale.  This terrible pellet as soon as it enters the victim explodes with vicious effect.  One bomb, if it chances to reach a vital part, is sufficient to kill the prey, althrough it sometimes requires several.  When a whale is killed it is towed to the point and beached.  When the tide goes out it is left high and dry and the men proceed to cut out the blubber.  This is found in thick layers under the skin and is sometimes several feet in thickness.  The work of securing the blubber has to be performed very quickly, for as soon as a whale is brought to the point, thousands of sharks congregate around, eager for a free repast.  Occasionally when a whale is killed it sinks.  If the water is over thirty feet in depth it will never come to the surface; if the water is shallow it will rise in thirty or forty hours.  In a case of this kind a buoy is attached to the whale and a boat remains near on watch.

The blubber, as soon as it is taken from the whale, is cut into small strips, put into large pots and the oil is fried or boiled out.  They have three of these immense pots at the Point, each of the capacity of about 1500 gallons.  As soon as one is filled, a hot fire is started underneath and in a few hours the fat is converted into oil.

The whaling business at Port Harford for the past two or three seasons has not been very remunerative.  In order for the men to make good wages, they must catch ten or twelve whales during the season.  The expenses for the three or four months in which the business is carried on foot up in the neighborhood of $1500.  This is all borne by the Captain.  The men work on shares, each receiving a certain portion of the oil, according to rank.

The best whaling station on the coast is at Point Conception.  The yearly catch is generally from twenty to twenty-five whales.  This year, however, the whalemen at that station have been in extreme bad luck, not having secured a single whale.  As they sometimes capture as high as five whales in a day, they yet have ample time to retrieve themselves.

So far as accidents are concerned, Captain Oliver has been remarkably fortunate.  Several times himself and men have had close chances for their lives, but always succeeded in extricating themselves in good shape.  The captain is somewhat of a believer in “luck,” and is sanguine that a good season will yet roll around and that he will realize from it a rich haul.