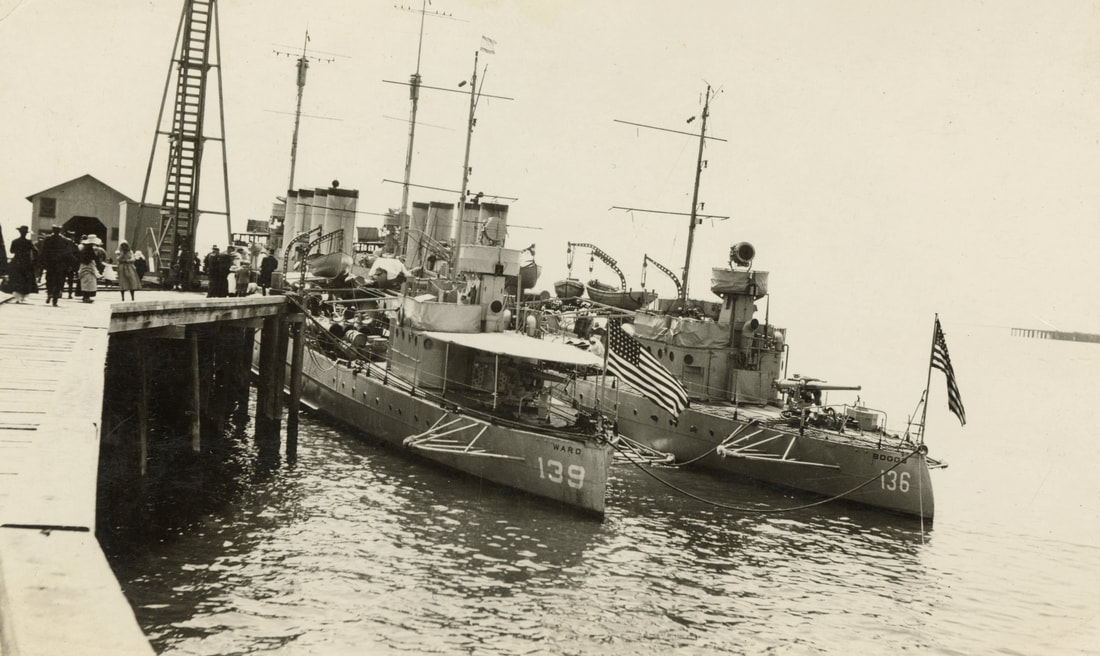 The photograph above shows two U.S. Navy destroyers docked at Port San Luis. From the hull numbers, we can date the photograph to between July 17, 1920 and July 21, 1921. The two are sister ships and native Californians–Wickes-class destroyers made in 1918. Light and fast, they can outrun what they can’t outgun. Each was hurriedly assembled at Mare Island Naval Shipyard in Vallejo as the U.S. scrambled to arm itself for World War I. The ship on the left, the U.S.S. Ward, will become one of the most famous ships in naval history. It took only seventeen days for the workers at Mare Island to build the Ward, keel to launch. She and her sister ship were dispatched to the Atlantic theater, but the Great War ended in November 1918, and neither ship saw combat. In July of 1919, she returned via the five year old Panama Canal and, like many other Navy ships, took a victory lap up the Pacific Coast. She visited all the major ports of California and Oregon. In September of 1919 she went to Seattle, joining with 51 other ships to form the largest fleet ever to assemble on the Pacific Coast.  This great fleet was reviewed by President Woodrow Wilson.

The Ward returned to California and remained there until she was decommissioned and mothballed in 1921.  She would remain in storage at San Diego for two decades.

In January of 1941, the Ward was recommissioned and put back in service. The United States was still at peace, but war had been raging in Europe since 1939, and Japan had been at war with China since 1937. By December 7, 1941, the Ward had been assigned to patrol the outer defenses of Pearl Harbor in Hawaii. Her skipper was W. W. Outerbridge, a young Annapolis graduate. It was his first command, and he had been aboard only two days. The rest of the crew were members of the Minnesota Naval Reserve who had been called to active duty.

On the morning of December 7, an unarmed cargo ship, the Antares, was approaching Pearl Harbor, towing a barge. At 6:37 am, the watch on the Ward reported seeing a periscope just behind the Antares. Outerbridge saw a wake behind that of the Antares, suggesting a submarine’s conning tower just below the surface. The sub was probably trying to follow the Antares through the harbor’s defensive barriers.  It is an act of war for a submarine to approach a foreign harbor submerged. Outerbridge did not need to ask for permission; general quarters sounded and the Ward leapt into action, accelerating from 5 knots to 25 knots (28 mph) as she began her run toward the intruder. The deck guns opened up at 560 yards, with one shot striking the sub’s conning tower right at the waterline. The sub rocked and went down. The Ward dropped four depth charges as she passed over the site. Oil boiled up to the surface, indicating a kill. The entire engagement was over in just eight minutes.

At 6:45 am, Outerbridge sent a dispatch to Commandant, Fourteenth Naval District, saying that he had attacked and sunk an unknown submarine attempting to enter a restricted area. Pearl Harbor was under attack!  Unfortunately, there were delays in getting his message delivered. No one wanted to disturb the Admiral with a false alarm on Sunday morning. Had the Ward’s crew really seen a submarine? They were, after all, pretty green. And where was the confirmation? No one else had seen the sub.  Just over an hour later, at 7:48 am, Japanese bombers appeared over Pearl Harbor. America had finally entered the Second World War. But for the Ward, the war had begun an hour earlier, and she had fired the first shot. The Ward served with distinction for the next three years, earning eight Battle Stars. In 1944, in the Philippines, a Japanese bomber crashed directly onto her, penetrating both sides of the hull. With the Ward irreparably damaged and burning, the crew was ordered to abandon ship. Fortunately, all her crew made it out. Another destroyer, the O’Brien, was ordered to sink her; the skipper on the O’Brien was W.W. Outerbridge, the same one who had commanded her at Pearl Harbor. On December 7, 1944, three years to the day after Pearl Harbor, Capt. Outerbridge was obliged to sink his first command. The U.S.S. Ward now lies at the bottom of Ormoc Bay in the Philippines.  Our photograph shows the Ward on a happier day. The United States has just won “The War to End All Wars”.  The Ward has returned unscathed and with all her crew unharmed; most will soon return to their civilian lives.  The little Ward will soon be going back to San Diego to slumber for twenty years, and it’s a beautiful day for a stroll on the pier at Port San Luis.